Home » A call for help, from one island to another

Posted at 12:46 in Uncategorized by noriko

Where better to build an ‘innovative city’ than on the frontline of climate change?

This was one of the key messages Earth Company’s Impact Hero, Kathy Jetñil-Kijiner, had for her audience at the recent Innovative City Forum in Tokyo.

The Marshall Islands is a chain of volcanic islands and coral atolls in the central Pacific Ocean. At just 2 meters above sea level, they have little protecting them from the ever rising tides. Homes and cemeteries on its low-lying islands are already being destroyed by king tides at a rate previously unheard of.

A cemetery in the Marshall Islands is washed away by rising seas.

A Marshallese poet and climate change activist, Kathy has been fighting for the rights of the small island nations on the frontline of climate change. She has used her voice and talent as an artist to draw international attention, and founded a nonprofit organisation, Jo-Jikum, with a mission to train other Marshallese youths to tell their stories to the world.

Earth Company has been supporting Kathy’s work – particularly in establishing and running Jo-Jikum – as our Impact Hero 2017.

Invited to the annual Innovative City Forum to give a keynote speech by Mori Art Museum Curator Fumio Nanjo, Kathy shared the huge challenge her country, the Marshall Islands, faces as a result of climate change; from already serious flooding and droughts, to an uncertain future.

But this wasn’t just a chance to educate.

Kathy was there with a very specific call for action for the room full of innovative minds, creators, architects, designers, scientists and technologists from Japan – a country with great expertise and resource.

0.5°C is the difference between life and death

Representatives from low-lying island nations, like Kathy, and organisations such as 350.org have long campaigned to keep climate change to within 1.5°C above pre-industrial levels.

“For a while, climate advocates were pushing for 2 degrees, but at 2 degrees our country would be under water. 0.5 degrees might not seem like much of a difference, but for our islands it’s the difference between life and death.”

“None of us expected it to be this bad, so soon”

However, although a recent report by the IPCC suggests that 1.5°C might still possible if the international community takes unprecedented action, for some of the lowest lying nations, it may still be too great an increase in temperature.

On stage in Tokyo, Kathy shared a conversation she had had this summer with Hawaii-based climate scientist, Chip Fletcher.

“He shared projections of what different areas of our islands would look like with one foot of sea-level rise, two feet, three feet, and so on. When he showed our airport underwater after only one foot of sea level rise, I heard a mostly Marshallese audience collectively gasp out loud.”

A temperature rise trajectory of 1.5°C by 2100 is estimated to raise sea levels by approximately 1.7ft (0.52m) [source], well above levels that will render key infrastructure unusable for the Marshalls.

The IPCC report also lays out just how big a challenge it will be to limit global warming to just 1.5°C by 2100, and the simulations go on to predict the effect of even greater temperature and sea level rise.

What does this mean for countries like the Marshall Islands?

“He [Chip] then moved forward with his assessment that the Marshall Islands can no longer only fight globally for mitigation, for the world to remain at 1.5 degrees Celsius. Instead, we must begin planning for adaptation – specifically building new islands. If we wanted to remain in our islands, he said, then we needed to seriously consider elevation.”

It is too late to focus only on fighting to keep temperature rise to within 1.5°C. If the Marshallese are to protect their ancestral homes and the land that is so core to their history and culture, they need to look for new solutions.

“I am still grieving, and angry, over this path we are being forced to take”

But Kathy’s anger and resentment towards this reality is clear. The Marshalls faces a huge challenge, not least because, “as a society impacted by colonialism and nuclearization, we are also a struggling nation lacking infrastructure and the technological expertise to create the solutions we need to survive.”

The Marshalls contributes only 0.00001 percent of the global total of emissions.

And yet, “we are now being forced to consider possibilities we would never have considered before, with money we don’t have.”

This anger led to a powerful collaboration between Kathy and a Greenlandic poet, Aka Niviâna. The poem and accompanying video they created with 350.org draws upon the unexpected link between their parallel realities of melting glaciers and rising sea levels (click the image below to watch the video).

(clicking on the image above will open the 350.org video page)

Moving from grief to action

But Kathy also knows that grief will only get you so far. She closed her keynote speech with an invitation and call for action.

One of the possibilities the Marshall Islands is exploring is reclaiming land – an area that Japan has a long history and deep expertise in. Yet with a GDP of just $199million USD, it seems unlikely the Marshall Islands will be able to follow in the footsteps of the Maldives, at least without substantial support. 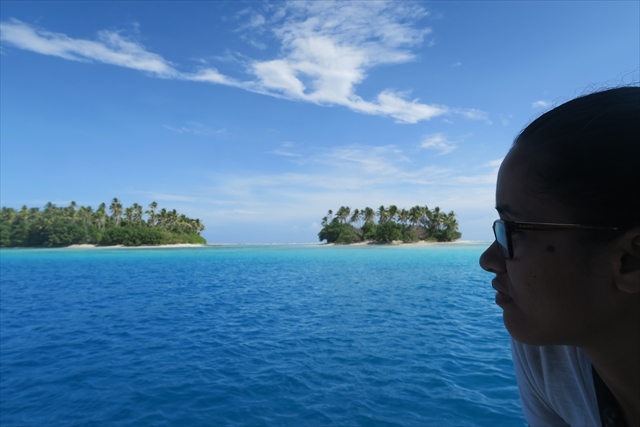 “Those artificial islands created by Maldives and Saudi Arabia are billion dollar projects for a handful of islands – we are a nation of 29 coral atolls and 1,156 individual islands and islets that stretches across 800,000 square kilometers, 500,000 square miles, of Pacific Ocean.”

With this challenge, however, comes the opportunity for today’s innovators, scientists, architects, businesses, city planners and designers to come together and design a city. A city that can withstand the rising sea levels that the Marshalls face.

So Kathy has extended an invite to those working to build more resilient and innovative cities to visit the Marshalls. This is their chance to seize the opportunity to develop solutions in a country that is already facing the effects of climate change.

It is a time of great uncertainty for her country, and the threat of displacement gets more serious with every day of inaction. And yet I get the sense that she, and others, still carry hope that our human determination in the face of challenge will prevail.

“And in the face of climate changes, which inevitably impact us all, I end by asking, from one island to another, that rather than standing back and watching our sea level rise, that we all instead rise to meet the challenge of climate change, together. Thank you, komoltata, im arigato.”


[Report by Mariko McTier with quotes from Kathy Jetñil-Kijiner]