Posted at 05:30 in Impact Heroes by noriko

Earth Company’s first open call for Impact Hero nominations attracted
over 70 nominations from across the Asia Pacific,
which resulted in 24 Impact Hero applications.
Below, we give you a little insight into the applicants,
as well as a close up of our six finalists.

The candidates address a wide range of SDGs through their activities. There is a strong focus on environmental and educational goals, but also on tackling poverty and promoting better healthcare.

The majority of candidates run their organization on an annual budget of less than 100,000 USD.

What kind of support are they looking for?

All 24 candidates were keen to gain fundraising support for their activities, but 67% of candidates also seek Earth Company’s support in opportunity building (introducing partners, PR etc) and 50% in nonprofit management coaching. We can see a clear need for the tailored support that Earth Company provides.

At the bottom of this page is an INFOGRAPHIC that provides some insight into our 24 candidates. But first, here is a little more on the six finalists, their life stories, and how they are devoting their lives to fighting social issues in their region (listed in alphabetical order).

Our Impact Hero 2018 will be chosen from these six finalists and announced in January 2018. Watch this space!

Born in a rural village in southern India, Ram grew up surrounded by nature and developed a deep love and respect for it. By his early 20s, Ram was traversing the country on photography and filmmaking assignments, documenting the natural world, but also witnessing the ecological degredation happening around him. He began to notice the huge disconnect between humans and the natural world they depend on, which he hypothesised was behind this destruction. He resolved to bridge this gap, using his skills to give children the the opportunity to connect with and develop a love for the natural world.

With his goal to use natural-history documentaries to educate young people about the ecosystem and the need for conservation, Ram has already reached 50,000 local students in the past 2 years through his work, using picture books, documentaries and setting up forest schools (that provide a hands-on approach to learning about environmental issues in schools and opportunity to connect with nature) as teaching materials.

This is an impressive feat, and something that Ram is quick to note he’s only been able to achieve thanks to the support he’s received from his community, including the school teachers who have collaborated with him. But he dreams about how much more he could achieve if he had more funding and a team behind him. 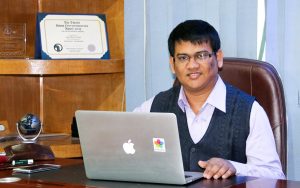 Maheen was born into a poor family in one of the poorest regions of Bangladesh. Despite this unfavourable start in life, thanks to support from those around him – his math teacher, his family – and a lot of hard work, Maheen managed to graduate from Dhaka University, the top university in Bangladesh, and go on to Hitotsubashi University in Japan for his masters.

Forty percent of Bangladesh’s 160 million population are under the age of 15. Yet the country’s educational infrastructure falls considerably short of providing for this high youth population, complicated further by the country’s economic challenges. Maheen founded his e-Education project in 2013 to address this challenge, with a vision of using technology to bring about a systemic change in the education system in Bangladesh.

Maheen has been using online courses to provide educational opportunities to children who would otherwise have very limited access to education and to schools with limited teaching resource. In recent years, his activities have started to garner attention from the government and major companies alike. Maheen believes that education forms the backbone of the society, and he aims to help teachers to make a positive impact on their country through the power of education.

John was born in Negros Island, Philippines, into a family of 5 brothers. John’s mother was forced to get married at 16, and John was born despite attempted abortions. He grew up as an unwanted child without knowing what it is to be loved, and eventually ran away from home at the age of 12. Though initially sheltered by his aunt, he was forced out onto the streets after being discovered by his mother. 7 years later, having fallen into child prostitution and gotten involved in drug gangs in his fight to survive, he was finally saved by a governmental organization.

Saved from an uncertain fate, John was fortunately able to go back to school. In 1998, whilst at university, he founded a nonprofit group with the goal of supporting young people – as young as 7 years old – who were abandoned by their parents and had become victims of drug-related crime and child prostitution, just like he had himself. Twenty years after its founding, there are now 16 branches across the country helping 8,000 youths to recover and preventing others from becoming victims in the first place.

John now works for the government in the Department of Social Welfare and Development, reinvesting the majority of his salary into his own organization in his fight to protect vulnerable youths. Despite his position in the organization and the number of youths he has supported, John says that he is still trying to heal the scars from his childhood, and believes that he is no different from the people he is trying to help.

Brought up in a middle class family, Piter’s mother taught him to share with others, and his father taught him to give back to society. Piter and his older sister have always been active contributors to society; for example his sister in relief efforts after the Indian Ocean off Sumatra earthquake in 2004, and Piter after the Bali attack in 2002.

When Piter’s sister and her husband started Bali Life Foundation in 2006 with the aim of providing street children with food, clothing, shelter and a basic education, they were overwhelmed by demand. Piter got drawn into using his skills as a musician to entertain and cheer up the children, but he soon began to play a key role, eventually taking charge of the organization in 2013. Currently more than 40 children live at Bali Life Foundation, and some have even gone on to attend university.

However, Piter believes that saving orphans is just treating the symptoms – not the cause – of a wider problem, and ultimately it would be better if the children hadn’t left their families in the first place. And so now the foundation has started to provide skills training and support to families in order to help them break out of the cycle of poverty and increase their chances of staying together.

The organization is just about getting by financially, but lacks the access to opportunities and resources to expand and deepen Bali Life’s impact on the communities they work with. Piter is dedicating every single day to ensuring his organization can continue to help those most in need.

Sebastien was born in France, and whilst studying to become an elementary school teacher, he volunteered as a firefighter. Sebastien spent a few years working in Paris, but his life would change dramatically when he travelled to Laos as a volunteer.

As Laos had started to develop economically, the number of traffic accidents increased every year, and yet there were no emergency services. Despite becoming a critical issue with a growing number of lives being lost on the roads, neither government nor existing NGOs dealt with it, perhaps due to the complexity of the challenge. While working for the Red Cross in 2010, Sebastien decided to launch Laos’ first free emergency service with local youth volunteers, despite having neither the funds nor the experience of running such an organization.

The team of volunteers has faced many challenges. For example, there were times, especially at first, when the injured were turned away by doctors when they realised the patients wouldn’t be able to pay for care. But the team is so dedicated that they find ways to overcome these obstacles. So dedicated, for example, that a team member even showed up after having broken a bone the previous day, wanting to find a way to help the team despite their injury!

The doctors that once turned them away now thank them for what they do, and the team is starting to see the positive change brought about by their dedication. They are currently exploring new projects and models in order to be able to save a greater number of lives and raise awareness, but are in urgent need of resources.

Rai was born and raised in a remote village near the Himalayas in Nepal; so remote that, to this day, they still don’t have local access to gas, drinking water, or electricity. As a child, Rai had to wake up at 4:30 every morning and spend 2 hours fetching water, and then another 2 hours to commute to and from his school. At age 10, he was fortunate to be selected as one of 99 national scholarship recipients out of 10,000 applicants. After graduating from an inner city school, he moved to Japan to study at Ritsumeikan University and then University of Tokyo graduate school, again on a scholarship.

Although Rai was very fortunate to have had the opportunity to receive a high level of education and study abroad, his own country has basic educational needs that are still unmet. For instance, many schools throughout the country struggle with a shortage of teachers.

So, in 2011, Rai founded YouMe Nepal in order to help turn this situation around. He has already built 2 YouMe Schools which now cater for 200 enthusiastic students, but his ultimate goal is to provide high quality education in all 75 districts in Nepal.

Rai currently works for Softbank in Japan in order to earn a basic income, and spends a great deal of this on running his organization. As soon as financially possible, he aims to return to Nepal to work full time on YouMe Nepal.